Yes, week 95!  I've been making regular backups of the progress of this game, and the first backup is from the 8th December 2018.  It really doesn't look much like anything though, and was a branch from the 3D engine code I'd been writing without direction for a little while, before that became my 3D Sokoban title "SokoBAArn!"  Still, you have to start somewhere!

One of the things with this game is that it's conversion of a PC game, which on one hand is good - as somebody else is designing it and producing a lot of the content for me - but on the other hand means that I'm trying to distill the game down to a much more humble platform, and they constantly throw surprises at me as they design and re-design various aspects of the game.

One of those aspects is the 'Hero Select' screen - which I first saw when their main itch page for the game as produced: 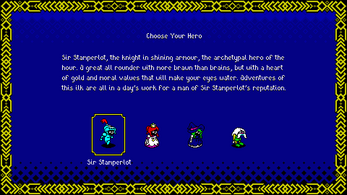 That was okay though, I could quickly handle that: