What started as a hobby, with a lone demijohn of elderberry wine bubbling away in the under stairs cupboard, has become big business for him in a few short years, and the number of allotments he owns, to grow the fruits, is getting bigger every year. Big business isn't easy though - this year another supplier has been flooding the market with cheap nasty wine, but Jack's wholesome organic produce still rules the market - despite all the competition tried.

But last night, at the end of another fabulous growing season, when he had started collecting the fruit for this year's vintage he heard a clanging of metal, smelt the foul smell of big business, and saw huge steel monsters roaming the allotments, trampling the paths and destroying his crops!

"By eck! Me 'arvest! It's a rum-do this!" Jack exclaimed, and off he set again to gather his harvest, and deal with the competition's mechanical menace that was threatening his livelihood...

As Dominetris was well received I decided to turn my attention to converting an arcade game which I liked and the Speccy never had a decent version of - "Mr. Do!". Improving my coding all the time, and using TommyGun to design all the sprites, the resulting game strayed a little from the arcade by replacing the "magic ball" with a number of bombs (it's my game and I never got the hang of that ball!). Largely well received it set the character of Farmer Jack firmly on-track to be used again in future games, such as "Farmer Jack and the Hedge Monkeys" which followed early in 2008.

The game also marks the beginning of a fantastic partnership with Lee du-Caine (found via a "Wanted..." add in the WOS forums) who did all the music & sound effects for this and all my games since, and literally adds another dimension to the games. His input into the final result, and the creative process cannot be underestimated.

MicroMart - "The graphics are nice and bright ... special mention should be made to the wonderful AY music ... Farmer Jack in Harvest Havoc has a good amount of polish to it, and is kind of naive fun which will please most of you out there in the wide world of retro" - 8/10

RGCD - "Quite simply, this is the best single-screen arcade game I've ever played on the 128K Spectrum ... Everything about it is pure class, from the ace backing music to the crystal-clear graphics and pixel-perfect collision detection." - 86%

ZXF - "The graphics are extremely pleasing to look at and the music is superb. It's the kind of game your six year old could get into, and to hell with the PSP. In fact, this is exactly the sort of game we need more of to get that generation interested in the Speccy." - 86%

ZX-Shed - "Farmer Jack is a modern day ZX Spectrum classic. I kid you not. It is extremely playable, fun and addictive ... But don't take my word for it, Buy it, play it. You will love it." - 93% 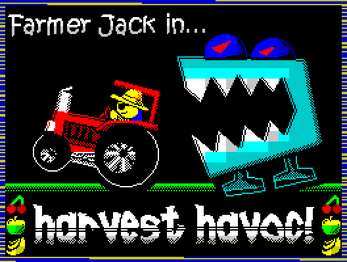 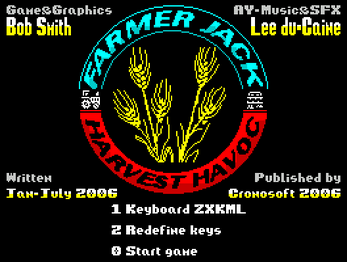 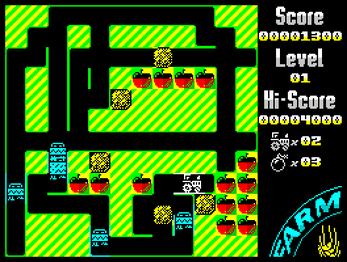 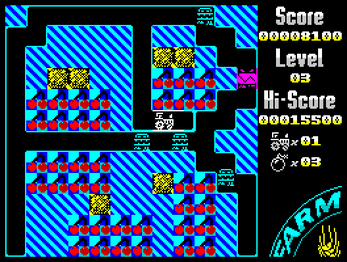